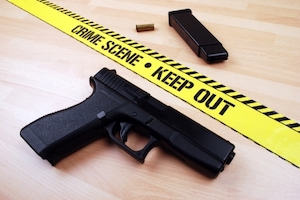 California has numerous gun laws that outline owning, carrying and using the weapons. There are also charge enhancements in place that can be used when a person uses a gun to threaten or injure others while committing another crime. These enhancements increase the jail time or other penalties the accused may face if convicted.

When this type of ban occurs and then you are found in possession of a firearm, you may face new charges for illegal possession. In some cases, this is a standalone charge after you are found to have the weapon. In other cases, this utilized as an enhancement to another crime such as robbery with a fire arm or possession of marijuana while armed with a firearm. Not only are these crimes charged with enhancements because a gun was used, you will face an additional enhancement or another charge for possessing the gun if you have a lifetime ban due to a previous conviction.

The most common gun crimes in Sacramento involve illegal possession of firearms. These charges cover anyone who is illegally possessing a fire arm. Depending on the circumstances, the charge is either going to be used as an enhancement or used on its own.

It can also depend on whether you carried the weapon while committing another crime, whether it was loaded or unloaded, how many bullets were in the magazine, and possession of ammunition. This extensive list shows that there are many different situations for gun crimes to occur under California law. Because they play a major role in the charges you face, all of these factors can either increase the severity of any sentence you receive, or carry a severe punishment on their own.

The Need for an Experienced Gun Crime Attorney

There is no doubt that anyone facing gun crime charges in Sacramento needs a highly experienced criminal defense attorney. If you possessed or are being accused of possessing a gun, you potentially face very serious consequences if you are convicted. This often includes time in a state prison and other penalties of a felony conviction.

If you do not have an experienced attorney who will aggressively represent your interests, you could be looking at a severe punishment. The right attorney will make it his goal to find any possible mitigation for the situation. He will make immense effort to investigate and explore all aspects of the case, and collect evidence to prove your innocence or reduce potential consequences. Only a competent and assertive defense attorney will be able to properly defend your rights.

Attorney Pabla has more than 16 years of experience in criminal defense law. He has dealt with both standalone gun crime, and other crimes that have related allegations. In many of these cases, he has been able to successfully obtain positive resolutions for his clients.

Mr. Pabla is the aggressive, knowledgeable defense attorney you need on your side if you are facing firearms charges in California. He will work to present evidence that encourages the District Attorney to drop or reduce your charges. If the case continues to trial, he will advocate for you in court in order to ensure your rights are properly defended.

If you’ve been charged with a gun crime in Sacramento, California please contact Law Office of Param S. Pabla for immediate help (916) 285-7900.